At our house, we use home automation for a lot of different things. One of them is the ability to get a quick overview of the state of our appliances such as the washer, dryer and dishwasher. That way we don’t accidentally forget to turn over the laundry or empty the dishwasher.

A red tile on our dashboard means something is ready for us to take action on – in this case that would be emptying the dishwasher after it finishes. See earlier blog post on how I built the dashboard below. 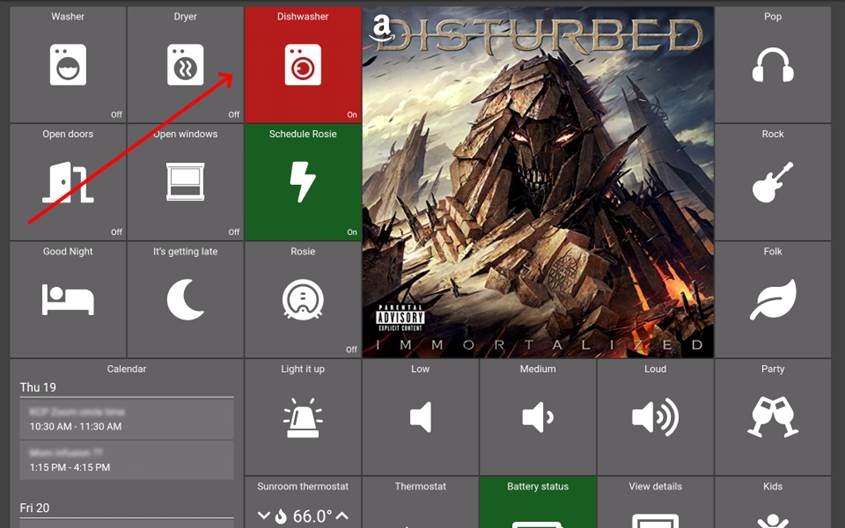 There are lots of tutorials on how to hook a “dumb” washer and dryer up to any home automation system, but I haven’t found any for the dishwasher that doesn’t involve figuring out how to hook up a power meter to it.

So, after a bit of trial and error I was able to do a highly accurate reporting mechanism using only a $20 multipurpose sensor that I had lying around.

You need one or more sensors capable of sensing tilt, acceleration and temperature. I used the $20 Samsung Multipurpose sensor which integrates seamlessly into my SmartThings home automation system.

Attach the sensor along the side of the dishwasher at a place where it doesn’t get in the way. My wife didn’t notice the sensor until I asked her to look several days later. 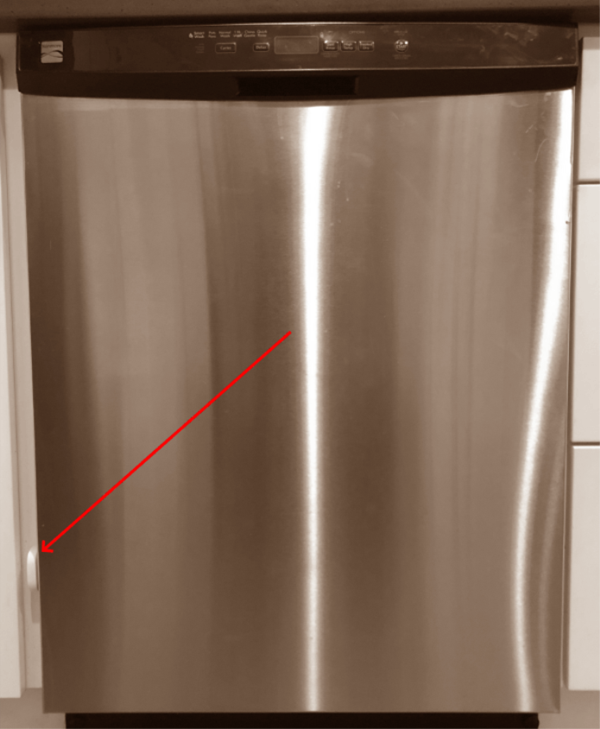 The key is that the sensor needs to be located such that it can measure the raise in temperature from inside the dishwasher as it runs through its heated drying cycle. For your dishwasher, it might be higher up or even underneath.

Then go into the configuration of the sensor and specify it to be used on a garage door. 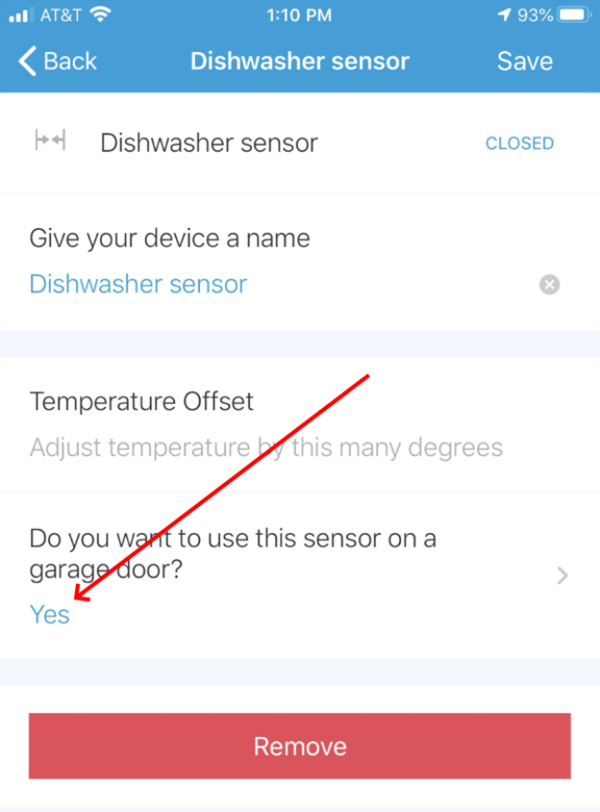 All that does is to use the tilt sensor to determine if it’s open or closed instead of the magnet. That way, you must open the dishwasher door all the way down to horizontal level before it registers as open. That’s what we want.

I’ve created a virtual switch called Dishwasher that I use to store the state of the dishwasher cycles which is what I use for the dashboard. It’s turned on when the dishwasher finishes and turned back off once it’s emptied.

It uses the fact that a bit of vibration occurs early on in the cycle, and temperature rapidly dropping after it finishes. The name of the multipurpose sensor is Dishwasher Sensor. Here’s the logic: 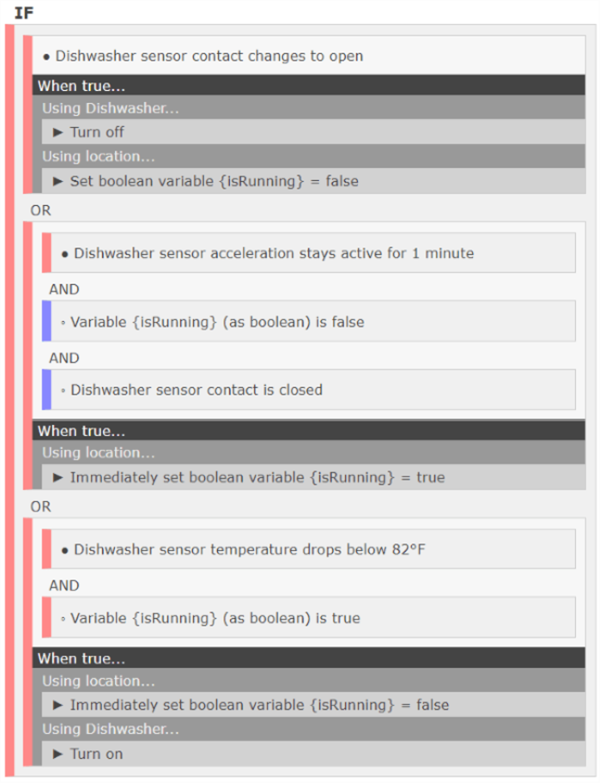 Notice how it uses the variable isRunning to keep track on when the dishwasher is running.

That’s it. Pretty simple, but it may require a bit of trial and error on where to place the sensor on the dishwasher door.

After showing some pictures of our smart home dashboard, questions started coming in about the cables going in behind the books. Where is the modem and what else is going on? Spoiler alert, the books are fake.

Here you see a couple of cables going in behind the books on the top shelve.

Removing the books reveal a tangled mess of cords, power bricks, a modem, and a home automation hub. 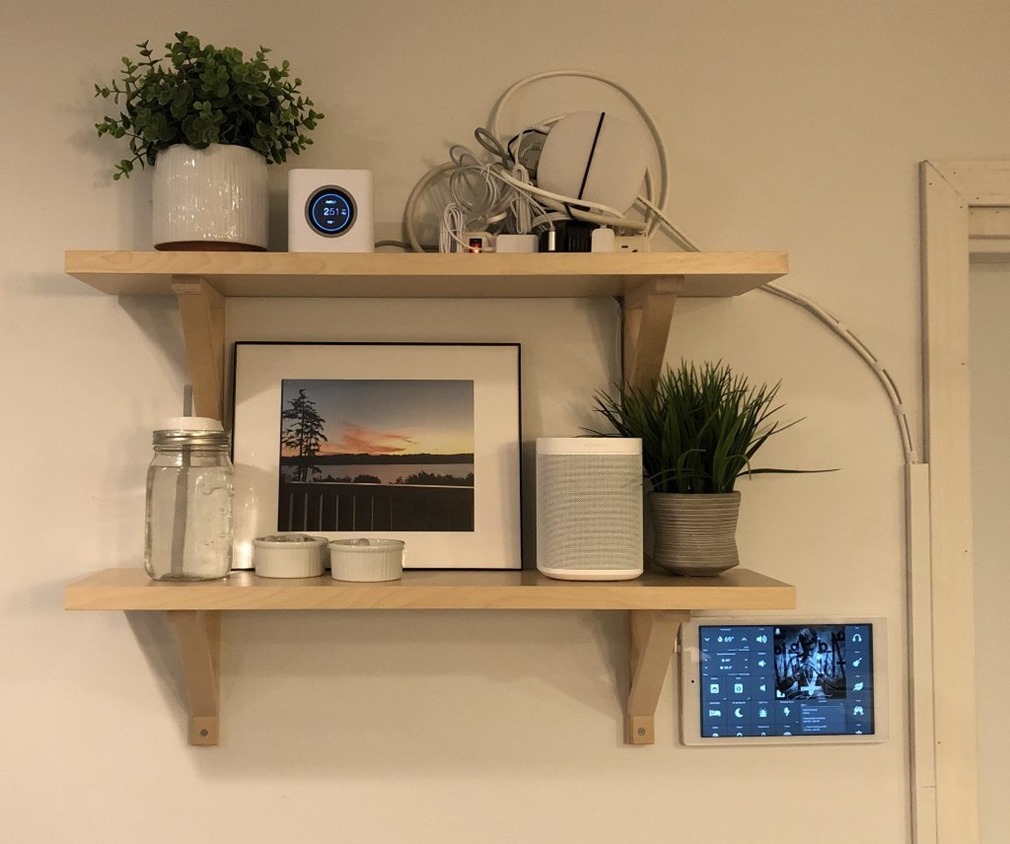 The fake books are hollow and can hold quite the amount of stuff, as you can see below. Looking at the books from above shows just how simple they’re built. 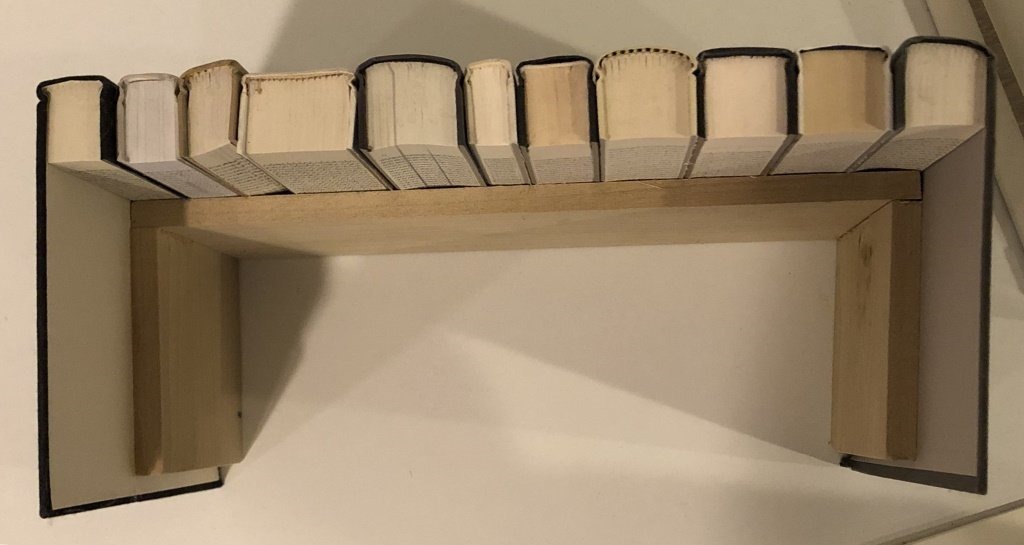 This is easy to make yourself if you can find some decorative books you like. You can also buy it (Covobox on Amazon) and customize the size (width) and the colors of the books. For reference, we got the 14 inch one and that is probably the smallest I would recommend.

We’ve had this for a couple of years, and it holds up great.