Today is a big day for all ASP.NET web developers. Both Visual Studio 2012, Windows 8 and Windows Server 8 is being released to MSDN subscribers.

It is also the day that the first version of Web Essentials for Visual Studio 2012 is being released, or simply Web Essentials 2012. Download it here

Here are some of the most interesting new features.

You can do quick checks on any property, pseudo class/element or @-directive to get a overview of what browsers are supporting the particular thing your mouse is hovering over. In this case the border-radius property:

In case there are any issues with your CSS file’s browser compatibility, the Messages list will be used to display them.

I’ve build a website that shows you exactly what’s supported by the VS2012 CSS editor. Web Essentials for VS2010 also had this feature, but it has been approved immensely in the new version and is a lot more accurate and up-to-date.

Clicking one of the browser compatibility errors takes you directly to the place in your CSS file where the error occurred. You can now use a Smart Tag to add the missing vendor specific properties.

In a big CSS file, going through the errors one-by-one can be a little time consuming, so it would be nice if you could perform some of these actions for the entire file in just a single click. 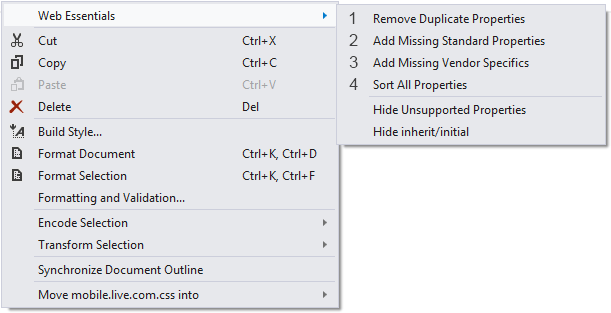 See the numbers 1-4 in the context menu? They are numbered like that for a reason. To clean up your stylesheet, start clicking the first menu item. Then move to number 2, then 3 and lastly 4. This ensures that things are done in the right order.

I’ve tested this on really big CSS files up to 15,000 lines with hundreds of browser compatibility errors and it only took a few seconds to run the auto-fix.

Good news for any LESS or CoffeeScript fans and semi-good news for Sass fans. The LESS editor is the most evolved of the three and you get all the goodness that Web Essentials 2012 brings to CSS directly in your LESS files. CoffeeScript and Sass (only .sass files, not .scss yet!) are supported in terms of colorization, formatting and outlining/code-folding.

The LESS editor does a lot more than just colorize nicely as shown above. It gives you full Intellisense for variables and Mixin’s as well. 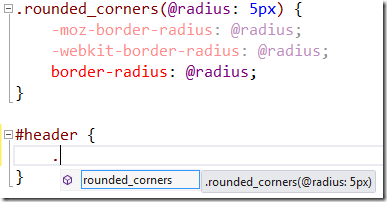 Also variables gets a first-class treatment in Intellisense. Hovering a variable will also show you its value. 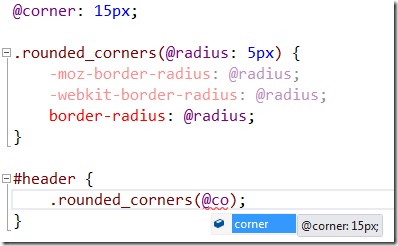 For both LESS and CoffeeScript, a preview window is shown on the right side of the editor where the compiled CSS or JavaScript respectively, are displayed. 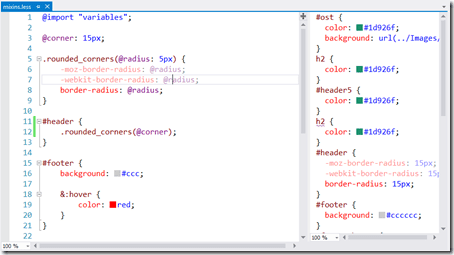 Every time the LESS or CoffeeScript document is saved, the preview window is updated to reflect the changes. Sass doesn’t have this ability in this first release of Web Essentials, but it’s coming. So is support for the new Sass syntax, often referred to as SCSS.

When you have to work with JSON and especially JSON REST API’s, it can be time consuming and cumbersome to create all your C# classes after what an API is returning. With Web Essentials 2012, that is now very easy.

Let’s say you copied this example JSON from the documentation of some JSON API out on the web.

You could construct the C# class manually based on this JSON string. But you could also just right-click in the C# editor.

Clicking Paste JSON As Classes will parse the copied JSON string from the clipboard and convert it into C# classes. 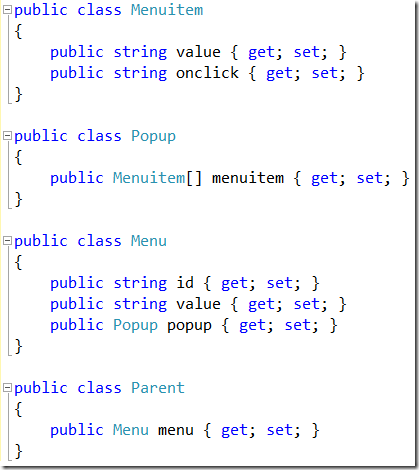 It uses JSON.NET behind the scenes, just like ASP.NET Web API does, so by using them together you will know that the serialization and deserialization is working as expected.

The color squares introduced in Web Essentials for VS2010 has been vastly improved. They now cover all types of colors, including all the new CSS 3 specific color formats.

The color converter has also been updated accordingly.

Let’s say you want to slightly darken or lighten a color in your stylesheet. That is now very easy using SHIFT+CTRL+ARROW UP/DOWN when the cursor is located on a hex color value. I don’t have a image demoing this, so you will have to imagine that the color changes its brightness. The color stays the same, but the brightness is adjusted.

The same shortcut key combination can be used to change any number values as well as move properties or whole rules up and down in the document.

A lot of work has been put into making Intellisense appear everywhere you might need it. Even as a URL auto-completer.

Animation names are also populated from the keyframes or any vendor specific keyframes implementation as well. 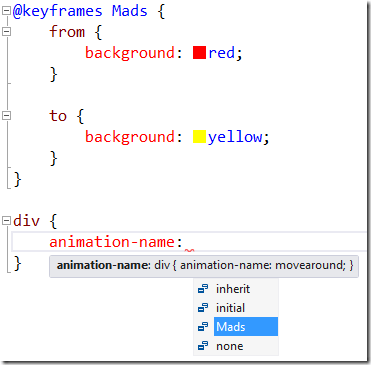 Even the more important ones are covered.

HTML elements, class names and ID’s? Yep, got that too. 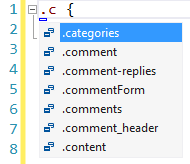 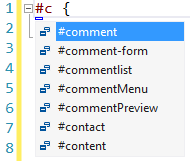 And a whole lot more.

So that was a brief overview of just a few of the features that I like the most, but there is so much more. Head over to the VS Gallery and check out a list of all the other features available.

These are great enhancements over what's in VS 2010. Looking forward to trying them out soon!

"These are great enhancements over what's in VS 2010. Looking forward to trying them out soon!" and over VS12 too...good work guys!

Big thanks to Mads Kristensen - a very useful tool indeed.

This is great stuff. Any ideas when SASS will be included? Until then I'll stick with Mindscapes' extension. Cheers, Jag

Jag, only .sass files are supported by Web Essentials right now, not .scss. It's too bad because most people will use .scss. When we finish coding the LESS editor, we'll make a port for .scss. Perhaps in 1-2 months.

To use your extension, I converted one fairly complex stylesheet from SCSS to LESS and now I'm torn between your extension and Mindscape Web Workbench :-) Your extension is far better in features. Unfortunatelly, SCSS is far better for me than LESS - I was basically unable to convert my SCSS to LESS, since it does not know conditions, for-next and @media queries. You already wrote about supporting SCSS in next release, so I'm looking forward to it. But there is one feature in Web Workbench I would like to see in Web Essentials: Workbench automatically compiles the SCSS (and I believe also the LESS) files into CSS when you save it. Web Essentials have live preview, but they don't save it, so I must use external tools to generate .css from. Do you plan to include automated "compilation" of LESS/SCSS to Web Essentials? I really prefer to do that on tool level over using solutions like dotLess etc. - they don't play well with web optimization and bundling.

Michal, the reason why I didn't prioritize that feature for Web Essentials is because I don't like the approach of having both the .less/.scss and the generated .css file in the same project. It seems wrong. Instead, I find it much better to perform the compilation step at runtime through the new Bundling &amp; Minification feature in ASP.NET 4.0 and 4.5 as described here www.asp.net/.../bundling-and-minification If that doesn't work for you, please create a suggestion at http://webessentials.uservoice.com so it can be prioritized. Thanks!

I had some issues with the import feature for less with variables and stuff. I then tried to rename my config file to not use a .less extension since it looks like that in one of you examples above. But then Visual Studio crashed when i even open a .less file with an import to a file that doesn't exist anymore. Let me know if you want more details but it should be pretty easy to recreate i think.

Seems to work now. I also have some issues with the import feature. It does work in your compiled .css but i get errors in the code view as you can see in this screenshot. http://i.imgur.com/IWCzn.png For the variables not in my lessconfig file i get "undeclared" and in the lessconfig file i get "unused" variables. And intellisense doesn't seems to work at all not even for mixins even though i don't get any errors from them. Let me know if you need more info or have any tips if im doing something wrong :)

Just a quick question: why not opensource it? I really like this project and i can imagine a ton of developers would love to improve little bits or add features. (Me included :)) Put it on GitHub and give it a try :)

Hi Mads Thanks for the nice extension. What LESS and CoffeeScript extension would you suggest us to use? So the LESS file will be compiled into CSS, and the CoffeeScript into Javascript at normal compile time.

Thanks, it's a great extension! One problem I found though, is that Visual Studio crashes whenever I'm trying to resolve a merge conflict in a .less file until I disable the extension.

Hi Mads ! I love this extension, its very useful I was wondering if the "Live web preview" was removed from the 2012 version because i can't find it, and using CTRL+ALT+Enter doesn't have any effect Thx !