I was debating whether to call this release version 1.1 or 2.0 because it contains quite a lot of new functionality. I’ve decided to stick with 1.1 since it also features a lot of fixes and tweaks to the current functionality. Download it at the VS Gallery. Now, let’s take a tour of the new features.

This was the top requested feature from the original Web Essentials for Visual Studio 2010. It finally made it in. 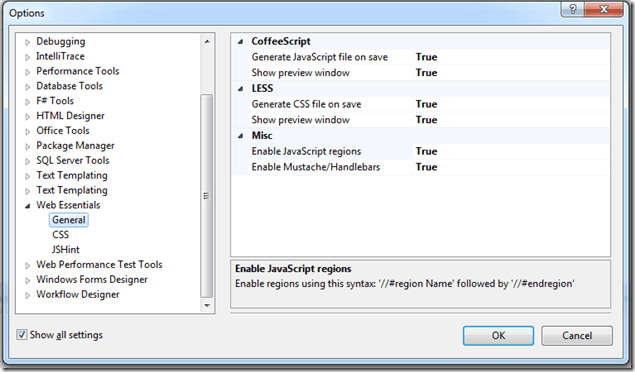 You can set the most important options through this dialog. If I forgot some options, please let me know so I can add them for the next release.

JSHint is a really good way of making sure your JavaScript follows certain coding guidelines and best practices. The default settings are very relaxed, but you can turn on more rules through the new options dialog.

The error window updates as you type, so you don’t have to right-click the .js file to kick off JSHint. It happens as you write.

The LESS editor has been updated with the latest functionality that is needed to truly take advantage of LESS. This includes:

Some people hate them, other people loves them. This is a feature that was in the original Web Essentials 2010 an by popular request now made it in the 2012 version. 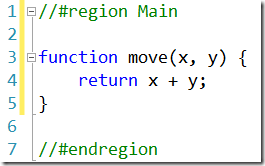 The problem with embedding your images as base64 dataURI’s is to keep it up-to-date with the original image file as it changes. Now you can.

Three new validators have been added that analyses the CSS for general performance issues. They validation the following:

They can be turned on/off in the new options dialog.

Thank you so much for reporting bugs. That is really helpful and increases the quality of the extension in general. Here are some of the bugs reported by the users:

Visual Studio 2012 will alert you of this update if you already have the previous version of Web Essentials installed. If not or VS didn’t alert you yet, go download it at the VS Gallery.

Very nice set of changes Mads! Developing with VS 2012 is becoming easier and sweeter every day. Thanks a lot.

Thank you Mads, fantastic job as always!! Loving the jsHint integration. but would it be possible to allow the definition of custom globals in a freetext-field?

Yes, I'm gonna look at that now. You can always do it manually in the individual .js files using the JSHint comment syntax

Thanks for your quick response Mads. &gt;&gt; You can always do it manually in the individual .js files using &gt;&gt; the JSHint comment syntax Yes, that is my workaround at the moment. But our project already has 100+ .js files (and growing) and it would be much easier to be able to manage that in one place. Thanks again for your outstanding work!

Very nice functionality, but I am having some problems with the JSHint part. It locks up after a little while, and stops updating the messages list. Only remedy seems to be restarting VS.

Is there a way to skip a file for JSHint? Also, it doesn't seem to work when using the globals? e.g. /* global WinJS:true */ it still shows WinJS as not defined in Messages

bb, You can't skip a file from the Web Essentials itself, but you can skip it by turning things off using the JSHint comment syntax at the top of your .js file. Everything from the JSHint docs will work http://www.jshint.com/docs/

Great Mads thanks! Any chance you'll make this available for 2010 as well? Thanks again.

Nice....but I think you can do better for a BlogEngine.net theme....this one is rather boring.

The VS2010 version of Web Essentials (http://visualstudiogallery.msdn.microsoft.com/6ed4c78f-a23e-49ad-b5fd-369af0c2107f) cannot include much of the new stuff in WE2012, due to major changes in the extensibility model in VS2012

Bummer. Thanks again for the great work!

Any version that is compatible with the VWD Express 2012?

Your Post is very useful, I am truly happy to post my note on this blog . It helped me with ocean of awareness

Cool. Been looking for this info for almost a day and thanks i found this

Thank You for that informative post. I really love to read articles that have good information and ideas to share to each reader.

I hope to read more from you guys and continue that good work that is really inspiring to us.

Thank You for that informative post. I really love to read articles that have good information and ideas to share to each reader.

First time user. Loving it so far. Thanks!