I was tag-team wrestled by Keyvan Nayyari and Janko today. They wanted me to take up the challenge of writing about my programming history. Since they are two seriously cool dudes I decided to play along.

How old were you when you started programming?

How did you get started in programming?

Red and white wine. That was my business ten years ago. I ran a small wine import business during college and my wines where so good I drank most of it myself. That’s when I knew I had talent. So I started programming.

What was your first language?

What was the first real program you wrote?

The first version of my Prison Bitch Name Generator, written in VB 6, revolutionized modern English forever. There's an online version of it here made by someone else.

What languages have you used since?

VB.NET, C#, Java, PHP, Action Script, Lingo (this is a weird language) and all web oriented scripting- and mark-up languages.

What was your first professional programming gig?

The Prison Bitch Name Generator never took off commercially so I had to look for other venues. I started a web design business like 3 billion other people did during the IT bubble. My success was limited but I did manage to build about 50 websites and win a design award with one of them (I wasn't the designer but took full credit like the gentleman I am). The first website must have been for a small Norwegian pharmaceutical company located in Oslo if I remember correctly.

If you knew then what you know now, would you have started programming?

Definitely yes. It’s the most gratifying, creative and challenging thing and it makes me very happy every day.

What is the one thing you would tell new developers? 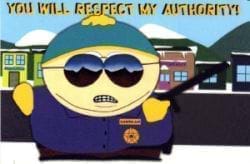 Rule #1. Buy the most expensive pair of Ray-Ban’s you can find. You probably look dorky like the rest of us programmers, but with a pair of Ray-Ban’s you look like a rock start. Don’t fall into the trap that any pair of shades will do no matter the price, and take pride in wearing them 24/7/365.

Rule #2. When a girl ask what you do for a living, lie to her. Here are some good job titles I've had great success with over the years.

What’s the most fun you’ve ever had … programming?

That’s without a doubt when I learned about the semantic web and the process of teaching myself how to implement the various technologies in ASP.NET. It only became more interesting when I learned how to consume, aggregate and do cool things with semantic technologies on the web.

And with those words I’d like to pass the torch to James Avery, Al Nyveldt and John Dyer.